Six decades of Serving the poorest of the poor

Our Lady’s Nurses for the Poor extend practical care to all who seek help, without discrimination and in the spirit of the Good Samaritan of the Gospel.

To mark the 60th anniversary of their mission in Newcastle, there will be a commemorative Mass at Sacred Heart Cathedral on 20 February. You will also be able to view a live stream of this special occasion on our YouTube channel.

For two-thirds of its 60 year history in Newcastle, the softly-spoken Sr Margaret-Mary Birgan has been the public face of Our Lady’s Nurses for the Poor in the proud industrial city, north of Sydney.

Inspired by the co-founder of the order and Australia’s saint-in-waiting, Eileen O’Connor, Sr Margaret-Mary has spent close to 40 years caring for generations of sick and poor Novocastrians through not only nursing care in their homes, but delivering thousands of food parcels and financial help as well.

From the single storey brick bungalow convent with a wide verandah at 8 Janet Street Merewether looking out across the Pacific Ocean, Sr Margaret’s reflects with an unfailing humility on her contribution to serving the poorest of the poor.

“As Eileen constantly reminded us, when we go into people’s private homes to help them, their homes are really their castles and so you always treated your patients with great respect”, Sr Margaret-Mary explained.

“I hope I’ve given a bit of hope, comfort and support and enabled people to have food on their table, money in their purse, to get to the hospital, to get to the doctors when they have to”.

“OUR LADY’S NURSES FOR THE POOR…BEGAN THEIR MISSION ON WHAT WOULD HAVE BEEN EILEEN O’CONNOR’S 70TH BIRTHDAY.”

“To this day I probably do at least 2000 visits to local homes here every year and just last Christmas, I gave out financial help to around 30 people”.

Our Lady’s Nurses for the Poor or the Brown Nurses as they’re affectionately known, began their mission in Newcastle on what would have been Eileen O’Connor’s 70th birthday: 19 February 1962.

The four foundation nurses, Mother Superior Cissie McLaughlin and Sisters Marie Purcell, Greta Gabb and Patricia Davoren quickly realised how much demand there was in the city for their support. By 1969, seven years after the mission started, they were conducting more than 3000 visits to local homes every year, delivering food, clothing and nursing care to anyone who needed it.

Sr Greta, now based at our Lady’s Nurses home in Coogee is the only surviving Sister from the founding mission in Newcastle and has fond memories from the three years she spent there before returning to Coogee to prepare to take her final vows.

“The Lions Club donated a little car for us and one of the big challenges we faced was an Asian flu epidemic in 1963 and a lot of our patients contracted that”, Sr Greta explained. 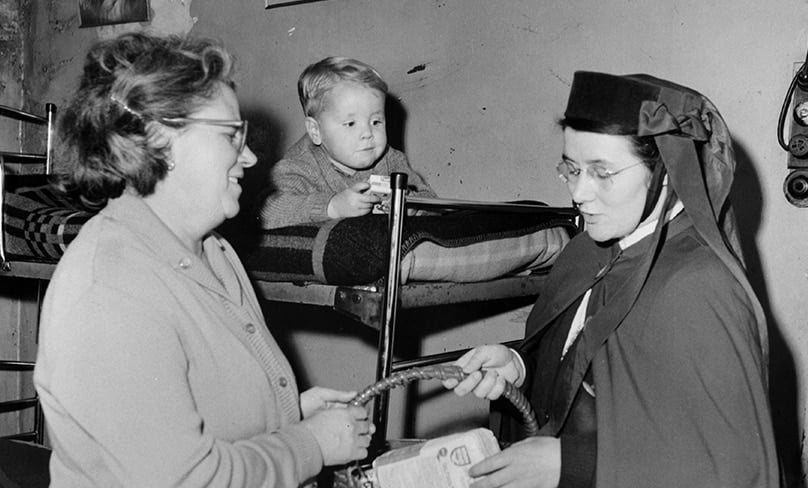 Sister Patricia Davis oln delivers a hamper of supplies to a family. Over six decades serving the people of Newcastle, the Sisters brought nursing care and other pastoral support to people’s homes. Photo: OLN

“We helped sick patients, often with no family to care for them and carried out all the duties that a district nurse would. But we went a bit further, by cleaning their houses and doing the shopping for them as well”.

Sr Greta said one of the great traditions left by Eileen O’Connor has been the care of patients wherever they live.

“You always went to where the patient was.

“Whether they lived near the duck pond at Centennial Park or under a tree at Maroubra, that was their home and you always did what the patient wanted or needed”, she said.

“WHETHER THEY LIVED NEAR THE DUCK POND AT CENTENNIAL PARK OR UNDER A TREE AT MAROUBRA, THAT WAS THEIR HOME AND YOU ALWAYS DID WHAT THE PATIENT WANTED OR NEEDED…”

Decades prior to the arrival of the Brown Nurses in Newcastle, it’s clear that Eileen O’Connor herself had a special affection for the city and its people and would have been proud of the mission there.

At the height of World War One, in 1915, Eileen travelled on her own to Newcastle to support the miners during a strike over unfair working conditions.

Travelling on her own was a particularly courageous feat for Eileen given she had battled a painful spinal condition, transverse myelitis for most of her young life, which left her unable to walk and confined to a wheelchair.

During her week-long visit to Newcastle, Eileen stayed at the Grand Northern Hotel opposite the city’s main railway station and attended Mass at the Redemptorist Monastery in Mayfield. One of the Redemptorists’ priests, Fr Wally Williamson CSSR carried Eileen into the church and he later became well known to the Sisters, celebrating regular Mass at Our Lady’s home in Merewether.

During Eileen’s visit to Newcastle, a concert was held to honour her and raise money for Our Lady’s Nurses for the Poor at St Joseph’s Convent at Lochinvar. 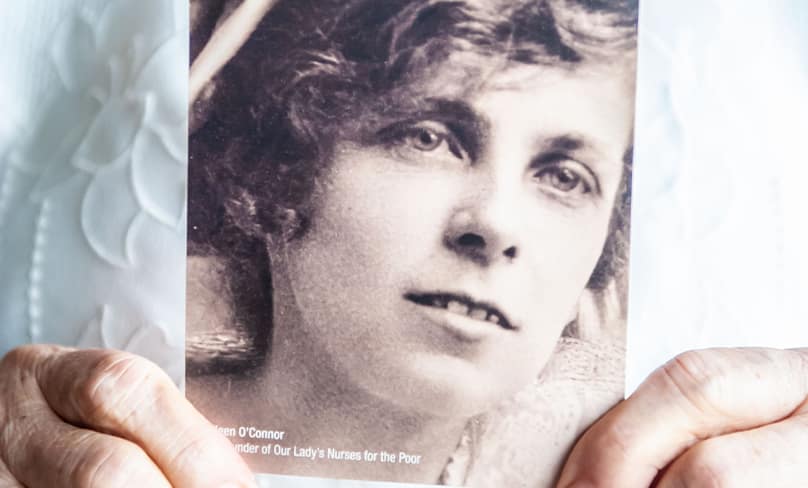 Church authorities in Rome are considering the cause for the beatification of Sydney Catholic Eileen O’Connor. Photo: Giovanni Portelli

“She must have been a significant figure in the Catholic community at that time to have been honoured in that way”, explained Sr Margaret Mary Birgan.

In 2018, the Archdiocese of Sydney began examining the cause for Eileen O’Connor’s beatification and canonisation and anyone with “useful information” is invited to come forward to assist Church authorities in Rome to consider Eileen’s cause.

Eileen’s legacy is today living on in Newcastle, not only through the day-to-day efforts of Sr Margaret-Mary, but through countless lay volunteers as well.

Primary school teacher, Ms Julianne Galbraith is a second generation volunteer who was raised from a very young age to support the mission of Our Lady’s Nurses for the Poor in Newcastle through her parents Alan and Ruth.

Her nieces and nephews have continued to support the mission in Newcastle, with three generations committed to playing their part to help Our Lady’s Nurses for the Poor.

“As far back as the mid 1960s, I remember as a young girl, seeing my father involved in the fundraisers for the Sisters, including calling the “housie” in the Holy Family Primary school hall in Merewether”, she explained.

“OUR LADY’S NURSES FOR THE POOR HAVE BEEN A WONDERFUL ASSET TO NEWCASTLE. THEY HAVE NEVER KNOCKED ANYONE BACK. THE DOOR IS ALWAYS OPEN TO ANYONE WHO NEEDS HELP”.

“He also played an important role in organising regular cabarets. He’d boast that he was responsible for discovering the legendary entertainer Colleen Hewitt who he enlisted as a performer at one of the cabarets!”

Over recent decades, Julianne and her family have played an integral role in planning the largest annual fundraiser for the Sisters: a fete day which was traditionally held on the last Sunday in October and only stopped being held around three years ago.

“My mum handmade girls’ dresses and boys’ pyjamas on Saturday afternoons leading up to the fete. My dad visited the fruit markets and the seafood markets gathering the food for the fete and alongside my four brothers and two sisters, we set up our own stall selling everything from sausage sandwiches and donuts through to books and fresh flowers”, she said.

“At the end of the day we would pack up and limp home exhausted and wait for the news of how much money we had managed to raise for the Sisters that year and they were always extremely grateful for our efforts”.

Alongside Julianne’s father, Alan at the fetes was another stalwart volunteer, Alan Bailey, who organised the chocolate wheel at the event for 30 years.

“The St Vincent De Paul Society was very good to us in Newcastle and they would lend us a van for the weekend of the fete to cart around the tables, chairs and the goods for the fete”, he said.

“Our Lady’s Nurses for the Poor have been a wonderful asset to Newcastle. They have never knocked anyone back. The door is always open to anyone who needs help”.

As the people of Newcastle reflect on the indelible mark Our Lady’s Nurses has left on the city over the past six decades, there are growing calls for the mission to continue and to share it with future generations.

“As a Catholic school teacher, I’ve been fortunate to invite Sr Margaret-Mary into the classroom to speak with the children about her work and the legacy of Eileen O’Connor. I’d love to see more lay volunteers come forward to continue this important work and I hope to do more of that work when I retire from teaching”, Julianne said.

Aside from their unfailing support for the disadvantaged, Our Lady’s Nurses for the Poor have supported local families in Newcastle through their pastoral care for everyone, she added.

“A MASS MARKING THE 60TH ANNIVERSARY OF OUR LADY’S NURSES FOR THE POOR IN NEWCASTLE WILL BE HELD ON SUNDAY 20 FEBRUARY AT 9.30AM AT SACRED HEART CATHEDRAL IN NEWCASTLE.”

“The nuns were like aunties to us. When my dad passed away, Sr Margaret-Mary was comforting us at the hospital and she was a reader at dad’s funeral Mass and so we’re very close to her.

“The Sisters are just very humble and generous regardless of a person’s creed or financial status: they serve everybody”.

A Mass marking the 60th Anniversary of Our Lady’s Nurses for the Poor in Newcastle will be held on Sunday 20 February at 9.30am at Sacred Heart Cathedral in Newcastle.

The public is welcome to attend. If you’re unable to attend in person, the Mass will be livestreamed on the Diocese of Maitland-Newcastle’s You Tube channel.

This article first appeared in Catholic Weekly on 4 February 2022.